I’ve spent my evening lighting candles and remembering the dead. It’s been an oddly quiet sort of Samhain, no interruptions by children, just myself and the altar and my memories.

Often I just light tealights, one for each of the dead, tonight I’ve done full blown candles and some of the married couples have had to share. 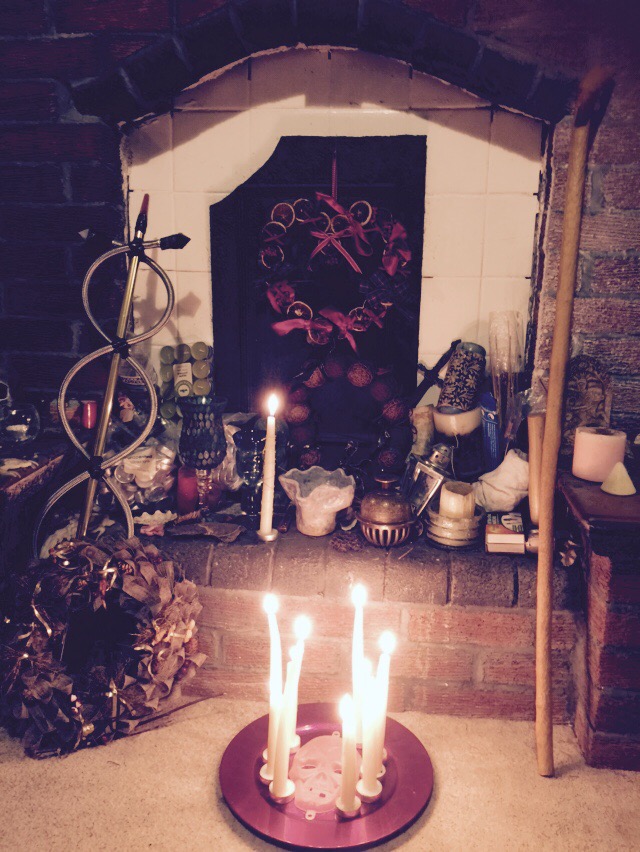 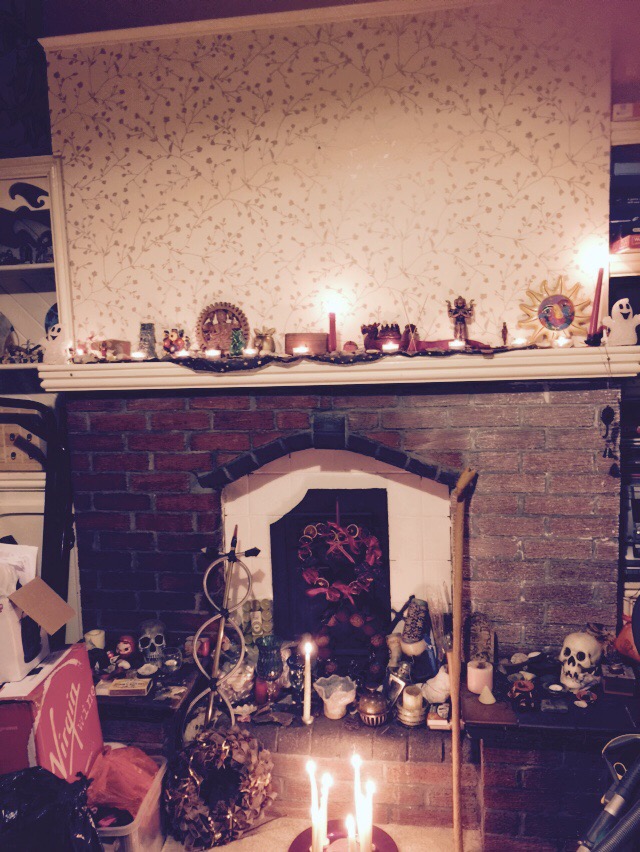 I know everyone brings different things to their Samhain ritual but my paganism has always been English with Welsh cultural flavouring from the Mabinogion (and most of the best British folk practice is Welsh originally after all) so I lack the Irish parts. I’ve set extra places at dinner before now – though not tonight and I’ve taken advantage of the thinning of the veil (but I fully expect that to remain thin from now until Imbolc) to scary. I got to thinking about why I light candles and the usual pagan community arguments about who stole Samhain or Hallowe’en from whom.

Like almost everything else in the 20th century that called itself Pagan Samhain exists largely due to 19th century academics deciding things probably existed. Have a read of Ronald Hutton if you want to know more (or plunge straight into the Golden Bough like I did if you’re a masochist with a taste for Victorian prose).  Then Uncle Gerald brought about Wicca and eighty years later we’re claiming Christians pinched it and called it Hallowe’en.

But I’m going to return to thinking about my candles for a moment. I’ve done different things over the years but I do always light candles, mostly because of my Mum. My parents have a strange attitude to religion and over the course of my life have fluctuated around atheism and agnosticism. The one thing that my Mum does which comes close to religion is when she visits Catholic Churches she lights candles for the dead, she does the same thing in Buddhist Temples and Shinto Shrines but with incense sticks. Mum is pretty clear she’s an agnostic and has never been remotely Catholic but her religious practice leans towards the pagan and so they make sense for me to continue into mine.

I guess you could say I’m stealing them from Christianity albeit via an agnostic. I don’t really care where my practices come from if I’m honest as long as they are authentic and if it feels real then it is real. I am an eclectic pagan after all. Christianity has been around in this country for a thousand or so years exerting its cultural influence. So why worry about thieving festivals back and forth? My religion is eighty years old but we’ve been remembering the dead at this time of year for hundreds and the how and when of the way I do it was shown me by an agnostic based on the teachings of Catholics. So I do it at the time of year that seems about right when the veil is thin.