Today I got another one of my LARP characters killed off. As a result of my ill health I’m struggling to play energetic characters, it started with Teacher Peema Holy in Horizon as I discovered low physical activity and a lot of politicking equals more energy spend than a physical LARP, or at least less ways of managing said energy spend. 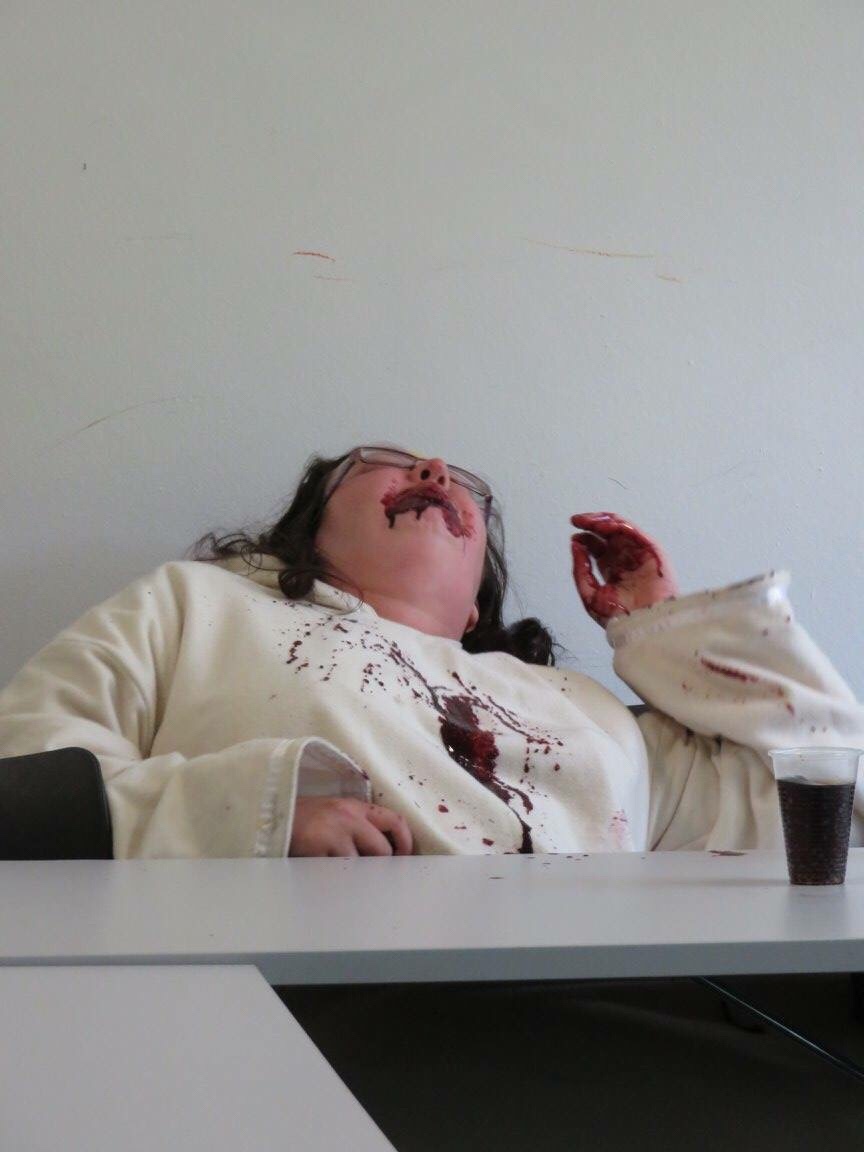 I discovered that mentioning to refs that they can kill off your character leads to a certain glint in their eyes as they discover a nicely emotional way to key into their plots.

Today I got Aimee Whittaker, trick shot and penny dreadful enthusiast killed. More than killed actually, completely unmade, exited from the cycle of reality. I thought I was buzzing after Peema’s death, Aimee has me totally jumping for joy.

LARP is for me, a lot about catharsis and to a large degree, wish fulfilment. I don’t really remember a time when I didn’t think a lot and pretty obsessively about Death, this predates my angsty teens and I suspect is not that unusual. As soon as you become aware of big concepts as a child you try to process them and the bigger the concept the larger the period of time it takes to process.

What I suspect may have been unusual though is the amount I felt drawn to death, I liked the idea of it, of being gone and nothing. Now, I don’t hate myself, even when I am in the middle of the Swamp I can believe I’m entirely worthless and be incredibly angry with myself but I don’t tend to hate me. But right now, fully medicated and really rational the idea of wrapping a scarf/rope/etc. around my neck and swinging out over the stairs feels incredibly attractive to me. Again, I don’t hate myself and I have things to do but the idea of killing myself is relentlessly attractive.

I thought it was a part of the Swamp, maybe it is, maybe after enough years the meds will wash this idea clean out of my brain, but frankly it feels like I’m hardwired to think suicide is a great idea.

My emotional reaction to hearing about other people’s suicides is really bad. Instinctively I feel something akin to wishing them ‘Congratulations’, I usually then get sad and miss them but that first pure instinct of a reaction is usually positive. If someone dies then I’m sad, if I’m told they killed themself then initially I’m congratulatory.

I’m pretty good about avoiding my own suicide but I’ve got it planned out. It involves the Bay because who wouldn’t take advantage of the natural deadliness of their surroundings.

I also have LARP, the rush I get from suicide in LARP is like nothing else. Death in LARP is a weird thing, as a horror player who got bitten and turned zombie in my first game I’m pretty well attuned to the idea that death in LARP is and should be a possibility. I’ve also walked into a long term vampire game to be told I am being executed at the end of the evening. I was very proud of knowing how I needed to roleplay that and very grateful to DS Luke for letting me play out the scene with him.

My favourite death though was in a horror game, it was set in a medieval religious community of monks and nuns. Goat was playing one of my closest friends within the community and we had spent a great deal of time praying and worshipping together. I wasn’t expecting him to kill me but as he swung the hammer down onto my face I knew exactly why he was doing it (to save my soul at the expense of his own) and loved him dearly for it. I was dead as a gift from my dearest friend and I loved it.

That’s not to say if I die in a larp I’m always going to be happy, a long term NPC of mine, Lady Amber Maze, was killed (as a part of the plot that killed my character today) in November. I had known the plot back in August and had had time to prepare but when I watched the players holding her funeral I tested up and actually had a proper sob half an hour later in the Crew bunker. She had been a part of my psyche for a long time and I liked her a great deal. I’m by and large sorry to see them go, these self-created voices in my head, these personalised parts of my psyche. But the draw of death by my own hand means that I revel in it, the last gasp of my characters tends to be in ecstasy.

It’s not happy of course, but I think that perhaps it’s the unhappiness that I enjoy. I thought for a while that the satisfaction I have in sadness was an angsty part of The Swamp (my term for my Depression). Three years on sertraline later and I’m thinking that actually maybe that’s not the case. I read somewhere that the modern ideation of happiness is simply a modern habit and that back in the Middle Ages they rated Sadness, I’m not sure how true that is but I do know that I enjoy feeling emotions as long as I can take my time with them and they’re not too strong or, even if they are, riding that dizzying rollercoaster can be… fun? Satisfying? Delighting?

I know that when I was four or five, certainly before I was regularly going to school I used to enjoy sitting in my room making myself cry. Usually by imagining my cat dying or sometimes my parents. I also remember the rush I had the first time I imagined myself dying. I remember the wallpaper in my room as I imagined my breath stopping. I know that that wallpaper was changed when I was seven.

I still get that rush, perhaps thirty years later, only now it’s part of a hobby and I can talk about it rather than keeping quiet because it would probably upset my parents.

Every so often I pass a milestone, adolescence is over, I’ve been taking anti-anxiety meds for X long, I’ve held down a job for six years, and I think; “Oh good, I’m less likely to kill myself.”

I am. But men I admire have a habit of killing themselves in their sixties, Ernest Hemingway, Hunter S Thompson, and the big one for me, Robin Williams. As a woman I’m massively less likely than they were to top myself at that stage of my life but I do wonder.

The last time I nearly killed myself, as in, really got close, was just after Robin Williams. I’ve watched Heathers, I’ve seen the statistics, but until that August I did not really understand that talking about suicide or reporting on it genuinely does provoke it in others. Now I was on my own working in France away from my support network but the urge to get a plastic bag as he did and wrap it around my head really did scare me. Mostly because until that point it had never been a method I had seriously considered using. And yet in a lay-by off a road in northern France I wanted to do it to a terrifying degree.

The idea that the urge to kill myself is one that is disconnected (albeit not completely) from my Depression is a relatively new one. It needs separate strategies to keep it at bay, and one of them is, every so often, to die in larp, sometimes by my own hand and sometimes not.